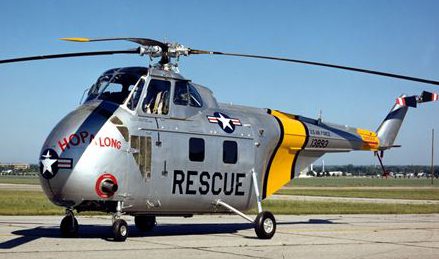 Bill couldn’t believe his eyes. In looking at this week’s upcoming auctions near his home in Xenia, Ohio, he stared at this Sikorsky UH-19B Chickasaw which was scheduled to sell on Saturday to the highest bidder.

Bill’s father Gene had served in the Unites States Air Force from 1947 until his retirement in 1991 and had flown these 19B’s (UH-19’s) many times. Bill even had the opportunity to ride with his father in a flight in 1990. Bill’s show cattle business has been very successful, and with his profits he has been buying vintage military items. This Chikasaw would be the icing on the cake.

Later this same day, Bill called the auctioneer to inquire about inspecting this Chikasaw. The auctioneer invited Bill over later that afternoon, noting that payment would be due on Saturday and that the helicopter was selling “as-is.” Bill arrived to the auction site about an hour later.

“Can I start it up? … take it for a ride?” inquired Bill. “Of course not …” replied the auctioneer, “We are selling it as it sits, as-is, with no guarantees nor warranties.” “Does it run? Fly? Any issues?” Bill asked … “Yes, it runs, flies, it’s all good but we aren’t guaranteeing it,” said the auctioneer. “So, if I understand, you’re selling this “as-is” with no warranties but I can’t really inspect it?”

Thus our topic today: Can you sell “as-is” and not allow [adequate/reasonable] inspection? The answer to that is, “no” as we noted in our “as-is” primer we published in 2015: https://mikebrandlyauctioneer.wordpress.com/2015/11/10/an-auctioneers-as-is-primer/.

This is a helicopter. Is it material that it starts? Lifts off the ground? Most would think so. Yet, according to the auctioneer it can’t be started up nor flown, and it’s being sold “as-is?” Can Bill be held to an “as-is” sale? The Supreme Court of the United States in Mottram v. United States suggested that in “as-is” auction sales the subject property must open for inspection and the bidders have [reasonable] opportunity for preview.

What the Supreme Court didn’t answer in “Mottram” nor subsequently is to what extent must property be open to inspection. In our Chikasaw example here, is that just looking at it? Touching it? Sitting in it? Starting it up? Flying it? And given this is a live auction, what about an online auction?

Lastly, and especially in this case, if this helicopter is not safe to fly (or is dangerous to fly) the auctioneer’s declaration that, “Yes, it runs, flies, it’s all good” will likely upset any claim of, “You bought it “as-is.” And, let me remind auctioneers as I have across the country — there is no obligation to always sell property “as-is.”

Mike Brandly, Auctioneer, CAI, AARE has been an auctioneer and certified appraiser for over 30 years. His company’s auctions are located at: Mike Brandly, Auctioneer, RES Auction Services and Goodwill Columbus Car Auction. He serves as Distinguished Faculty at Hondros College of Business, Executive Director of The Ohio Auction School, an Instructor at the National Auctioneers Association’s Designation Academy and Faculty at the Certified Auctioneers Institute held at Indiana University.